“You pile up enough tomorrows, and you’ll find you are left with nothing but a lot of empty yesterdays.” 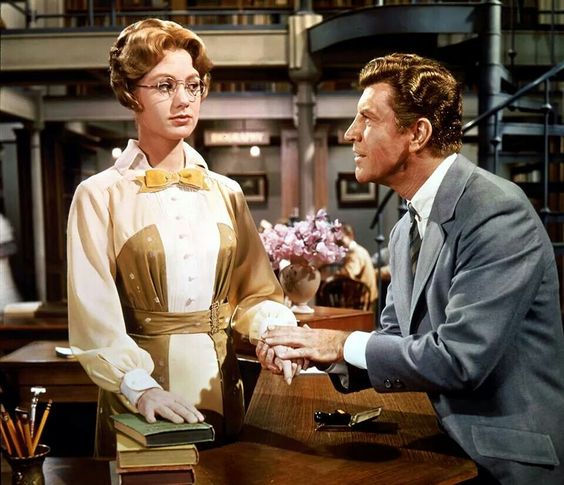 -Robert Preston as Professor Harold Hill in “The Music Man” (1962)

I mean, think about it.

On the surface you have this traveling con man who slips into town and suckers people out of their money.  And his tactic is to teach what he calls, “The Think Method.”  that is, if you think yourself playing the musical instrument hard enough, you’ll be able to do it.

We know now that there’s something to that.  Sure you have to put in the work, but what he’s really professing is the Law Of Attraction.  And we see in the film that it actually works.  Of course not in the way that he intended.

Little lisping Ronny Howard wants to feel confident and loved, the Mayor’s men want to express themselves, and the whole town wants so badly to feel proud of themselves.

And then there’s Marion, the bespeckled, hair bound, conservative and protected librarian that has unintentionally captured the hart of Harold Hill.

Now, while in the timeline of this movie, Harold is trying to seduce her cause she’s the main obstacle in his scheme, he later realizes his feelings for her.  Again, what he’s been truly wanting all his life is right there in front of him.

And in the height of her protests he drops this quote.  Man, what a juicy line.  And he doesn’t’ even know how right he really is.  Of course he’s really speaking about everyone in the whole movie, even himself… and even us.

How many times have we wanted something, truly wanted it, and yet were holding ourselves back from it, afraid, protective, perhaps putting it off for another day.  And what are the consequences of that?  How many days, weeks, months, years of the same unfulfilled dreams can we truly endure?  What happens later on when we look back an see nothing but all the empty dreams that never had a chance.

Listen to Harold (after all, he is a Professor) and pick one thing, right now, that you’ve been wanting in your life, and do something NOW to head towards it.  You may get it, you may not, but at least you won’t have the burden of never knowing.

And you can always think the Minuet in G while you’re doing it.  That always helps.